Not many know of Parev village, 42 km from Bihar’s capital Patna, which is a hub for traditional brass utensils manufacturing units in Patna district. Dozens of big, medium and small units supply brass utensils across Bihar, as well as to neighboring Jharkhand and eastern Uttar Pradesh.

Work in Parev thrives not with government’s support, but with the determination of local manufacturers and entrepreneurs and hardworking craftsmen. They have not only kept their traditional craft alive but have ensured its growth. This is a rarity in rural Bihar, which is mainly agrarian in nature.

“Once, only copper utensils were manufactured in a small way, but now Parev has made a name for itself in brass utensils manufacturing,” said Satay Prakash, who is in his late 60s.

Despite fast-changing lifestyles and habits, including changes in cooking utensils, brass utensils, considered auspicious, are still in high demand, particularly in rural and semi-urban areas. The utensils used for offering prayers and rituals, at home and in temples, are helping brass utensils manufacturing units in Parev thrive.

There is government apathy towards the small manufacturing units. The government does not ensure the easy availability of raw materials, nor does it ensure uninterrupted power supply. There is a lack of facility for taking loans, besides lack of essential infrastructure.

“There is lack of government support to brass utensil manufacturing units at Parev,” Biresh Kumar, a proprietor of a medium-sized unit, told VillageSquare.in.“Successive state and Central governments have done nothing but giving repeated promises to develop Parev as a brass cluster.”

There is only one bank branch in Parev despite the manufacturers’ consistent demand to open more branches to facilitate easy loans to entrepreneurs. The single branch of a nationalized bank started more than four decades ago, and has been the only one catering to the manufacturers for all these years.

“For small manufacturers or for those running their units from homes, it is difficult to get loans from the bank to develop their business,” Mahender Kumar, who runs a small manufacturing unit from his home, told VillageSquare.in.“The bank prefers to provide assistance only to big manufacturers.”

“People are engaged in doing some or the other related work like flattening plates with hammer, giving shape to pots or bowls with chisels, and polishing utensils,” Kaushal Kumar told VillageSquare.in. According to Guddu Kumar, who runs a medium-sized unit, business is better than what it was ten years ago.

There are several units run from homes, shops and workshops in the bylanes of Parev. One can hear loud sounds of hammers, wooden mallets, metal chisels, scissors and running machines from the units.

“Parev is probably the only village of its kind in Bihar where manufacturing units are running successfully,” said Raju Kumar, who owns a unit. “It is the only village that pays highest revenue to government in terms of electricity bill and other taxes,” he told VillageSquare.in.

With the demand for brass utensils increasing in recent years, manufacturers admitted that their business as well as profit has improved. “With income of people, particularly in rural areas and small towns, increasing, they gift more brass utensils while giving their daughters in marriage and for religious rituals,” said Biresh.

A few years ago, villagers used to migrate to Nepal, Moradabad and Gujarat to earn a livelihood, due to a slump in demand. “Now, there is no issue of livelihood and earning following the increase in demand in the last few years,” Ravi Razak, a worker, told VillageSquare.in.

More demand is a positive sign for manufacturers as well as for workers, as they get to earn more. According to Ravi, through the year there is demand for brass utensils, but it peaks during the traditional marriage seasons, locally known as lagan, which is usually held in March during spring, April-May during summer and November-December during winter.

“We still follow the traditional technique here,” said Raju Kumar. “The lengthy process of making of brass utensils start with melting of raw material, molding it into nuggets, flattening and shaping them.”

Kallu, who has been working for nearly two decades, said they use earthen stoves buried in the ground to control temperature for heating the plates before shaping them. Designs are still made by master craftsmen with details having been passed orally through generations.

There are over 1,500 houses in Parev, mostly belonging to Thathera caste, designated as OBC, that specialises in making metal utensils. More than one-fourth of the households are engaged in manufacturing of brass utensils – from melting raw material to giving shape and polishing.

District labour department officials said brass utensil manufacturing units at Parev have generated hundreds of jobs for local skilled and unskilled workers. “More than 1,000 workers are engaged in brass utensils manufacturing in Parev,” they said. Some youth have come forward to become entrepreneurs.

The manufacturing units have provided an opportunity for dozens to prosper and hundreds to work and survive without moving out of their native village. “We get work throughout the year here except two months during monsoon,” said Ravi. “Several villagers who had migrated in search of work have returned to Parev as there is plenty of work now,” Vishwanath, a worker, told VillageSquare.in.

Raju said that the GST has created problems and is not helping their business grow. “GST is bad for us as we have to pay 18% on raw material and 12% on finished items that make brass utensils costly for buyers, slowing down demand in the market,” he said.

Many of the manufacturers recounted difficulties in bringing in raw materials due to police harassment. But power supply is better now, compared to two to four hours of supply that they had a few years ago. “It was really tough to survive, but thanks to our community’s determination and hard-working employees, we are now in a better position,” said entrepreneur Sanjay Prasad.

According to manufacturer Dileep Prasad, brass utensils manufacturing may not be an important thing for industrialised states, but in Bihar, it is of worth since it offers livelihood to hundreds of rural families.

“We have been struggling for years in the absence of state support and proper infrastructure,” Dileep told VillageSquare.in.“The units producing brass utensils could become a brand in the country after Moradabad if government provides us assistance.”

Mohd. Imran Khan is a journalist based in Patna.
This article was originally published on VillageSquare.

Disclaimer: The opinions expressed within this article or in any link are the personal opinions of the author. The facts and opinions appearing in the article do not reflect the views of Folkartopedia and Folkartopedia does not assume any responsibility or liability for the same. 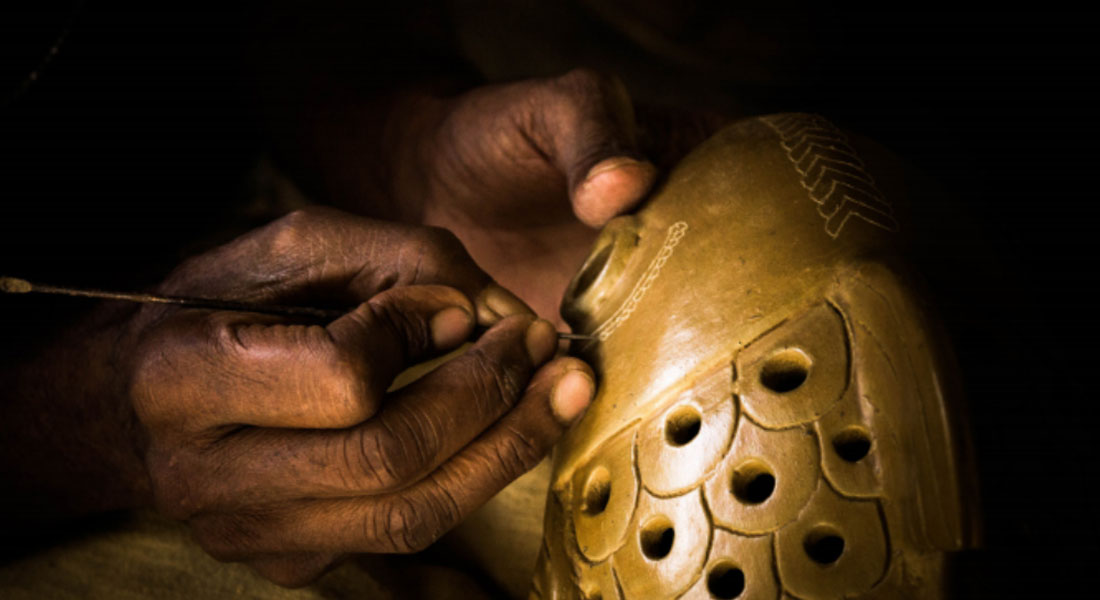